Globalization and its impact on women in developing countries 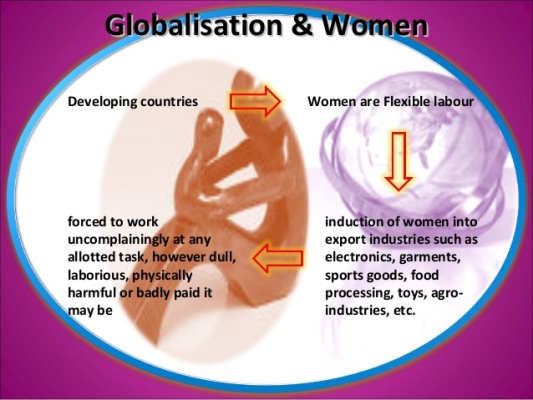 Within the past two decades, globalization has had a huge impact on the lives of women in developing nations. Globalization may be denoted as a complex economic, political, cultural, and geographic process in which the mobility of capital, organizations, ideas, discourses, and peoples has taken a global or transnational form. The global economic institutions are seen to be privileging western culture and political norms, and present them as models of the rest of the world, while ignoring and marginalizing women’s indigenous movements in the Global South. Recent feminist’s philosophers contend that neo-liberalism prioritizes on economic growth, efficiency, and profit making over other values such as the promotion of economic justice and enhancing democracy and good governance.

According to a United Nations Development Fund for Women’s report (1997), over the past two decades the process of globalization has contributed to widening inequality within and among countries, coupled with economic and social collapse in parts of Sub-Saharan Africa and countries in transition like in Eastern Europe. Globalization is tied to momentous political changes of the present era such as the rise of identity politics, transnational civil society, and new forms of governance and universalization of human rights. Concerning economic inequalities, women are seen to be exploited by Transnational Corporations with the collusion of their governments.  Trade liberalization policies have led to the decline of small-scale and subsistence farming in developing and less developed countries because western countries, sell heavily subsidized agricultural products to the developing or less developed countries. As a result, many female farmers who have been pushed of their land have sought  employment  in export processing zones, at lower wages than their male counterparts in their countries.

The exploitation of women in this sector denies women workers their rights to representation, unionization and compensation. Regarding Structural Adjustment Policies (SAPs), many poor countries have been forced to undertake as conditions of borrowing money from organizations such as the International Monetary Fund and the World Bank. In this regard, SAPs has had a negative effect on women mainly in developing countries, where the government’s borrowing money from SAPs have rescheduled their debt by reducing for example, publicly-funded health services, education and child care, which have contributed to maternal mortality and the introduction of school fees has made education unavailable to the poorer children, especially girls in developing countries.

Furthermore, many Postcolonial writers that are Postructuralists are concerned with the colonial relationship of domination and subordination established under imperialism. They state that the dominance of western knowledge have persisted beyond the granting of independence to formerly colonized states. They argue that the colonized must represent themselves and that the constructions of ‘self’ and ‘other’ foster racial and cultural stereotypes that denote the other, in their case ex-colonial subjects. Furthermore, western feminists have been criticized for treating women as a homogeneous category which does not acknowledge their differences depending on their culture, social class, race and geographical location.

Additionally, Postcolonial feminist challenge Western portrayals of Third World women as poor, uneducated, victimized and lacking in agency. Meanwhile, Marxist feminism makes a causal connection between capitalism and the subordination of women. They contend that women are an exploited class in the capitalist mode of production. Furthermore, Critical feminists such as  Robert Cox portray the world in terms of historical structures made up of material conditions, ideas and institutions. These forces interact at different levels, that is, production relations, the state society complex and historically defined world orders. According to Cox while ideas are important in legitimizing certain institutions, and are the product of human agents, there is always a possibility of change.

Concerning migration, globalization has created labor demand patterns which inherently favour short-term, temporary employment. As a result, a short-term contracted labor migration appears to be on the rise with distinct gender differentiated consequences. Migrant women from developing countries are increasingly victims of trafficking, for the purpose of sexual exploitation. Due to the lack of effective international mechanisms that regulate and protect the rights of labour moving across national borders both legal and illegal migrants are vulnerable to human rights abuses. Lastly, regarding the impact of globalization on democracy and governance, feminist philosophers argue that neoliberalism has not resulted in increased political influence of women on the whole, especially at the level of global politics because global economic institutions are not adequately representative. At policy level, the impact of globalization on women and gender relations continues to be neglected nationally and internationally. Yet more remains to be done to integrate gender equality dimensions in their normative, policy and operational work so as to ensure the continuing leadership of the system in promoting gender equality, development and peace within the context of globalization.

The dilemmas confronting feminist activists who participate in the global feminist movement, which where mass-based revolutionary movements have been largely replaced by Non-Governmental organizations (NGOs) funded by some countries of the Global North. As a result, the women depending on NGO-led projects run the danger of pushing the agenda of the NGOs instead of promoting global gender justice. In conclusion, global strategies involving a wide range of both public and private actors are required to address issues of globalization and its impact on women in developing countries. –