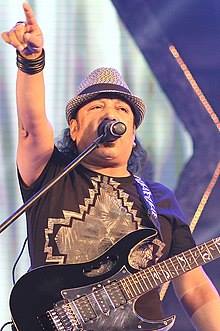 Do you know why i write all these line? Or did you listen this word before today. Maybe listen because all these lines are created our famous, mystic legends musician called #Ayub_Bachchu . Who is mostly known all of us as #AB. He was a guitarist, lead singer, vocalist and song writer.

Ayub Bachchu was born in Chittagong in 16 August 1962. His father name was Haji Mohammad Ishaque Choudury and mother was Norjahan Pervin. He grew up in Chittagong. In his earlier life when he was only 16 years old he made his debut in the music industry by the song of”HARANO BIKELER GOLPO” . Then he started his career with #Feelings band. In 1980 to 1990 he worked as the lead guitarist of #SOLES Brands. In 1991 he formed his on brand #LRB or #Little_River_Brand. After few years he changed the name as #Love_For_Blind but the surname was still LRB.

In his life he was created many songs and music. He was rock star. He also collaborated of Radio Foorti to bring the new talents and fresh voices to spotlight by giving them platform to perform and shine. Bachchu was one of the leaders of Bangladesh Musical Bands Association (BAMBA).

Bachchu was admitted to the CCU of a hospital in Dhaka in November 2012 for the accretion of water in his lungs. He recovered after receiving treatment.

But On 18 October 2018, he again felt illness of cardiac failure at his residence in Maghbazar and finally passed away at the age of 56. He was declared dead at the Square Hospital, Dhaka. In the Shaheed Miner Ground his first Namaze Janaza was held after jomma Namaz.

May Allah keep him in peace and give jannatul ferdous