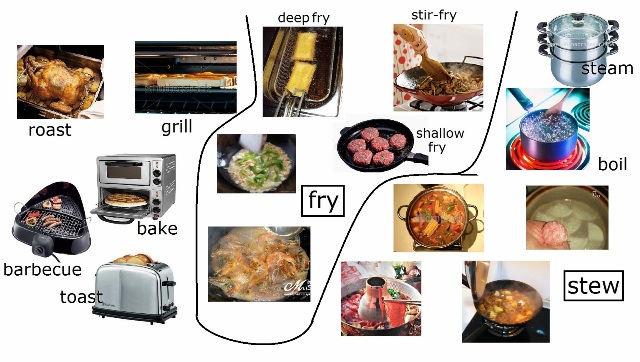 Here are the most basic Cooking Methods and  techniques

This Cooking Methods involves applying a dry convection heat to your food in an enclosed environment. Baking is similar to roasting, but refers more to breads, pastries, and other sweet items. Most items are baked in the oven until cooked through. The dry heat involved in the baking process makes the outside of the food go brown, and keeps the moisture locked in. Baking is regularly used for cooking pastries, bread and desserts.

This Cooking Methods means cooking your food in fat – there are several variations of frying:

Frying is one of the quickest ways to cook food, with temperatures typically reaching between 175 – 225ºC.

Roasting is generally the same as baking, but refers more to proteins and vegetables. Roasting is common to do in the oven and items are cooked until golden brown and tender. The most common item that’s roasted is a turkey on Thanksgiving.  Roasting is basically a high heat form of baking, where your food gets drier and browner on the outside by initial exposure to a temperature of over 500F. This prevents most of the moisture being cooked out of the food. The temperature is then lowered to between 425 and 450F to cook through the meat or vegetables.

This is a fast, dry and very hot way of cooking, where the food is placed under an intense radiant heat. You can use various sources of heat for grilling: wood burning, coals, gas flame, or electric heating. Before grilling, food can be marinaded or seasoned. A similar method to grilling is broiling, where the heat source originates from the top instead of the bottom.

This Cooking Methods means cooking your food in water vapour over boiling water. For this, it’s handy to have a steamer, which consists of a vessel with a perforated bottom placed on top of another containing water.

Steam rises as the water boils, cooking the food in the perforated vessel above.

This involves a small amount of hot liquid, ideally at a temperature between 160 and 180F. The cooking liquid is normally water, but you can also use broth, stock, milk or juice. Common foods cooked by poaching include fish, eggs and fruit.

This involves cooking liquid on top of a stove in a pot or pan. It should be carried out on a low heat, and you will see bubbles appearing on the surface of the liquid as your dish cooks.

Similar to grilling, the heat source comes directly from the top. You should be able to adjust your oven setting to broiling, but be careful, as this cooking methods works quickly and your meal could easily become burned.

Here the food is part-cooked, and then immediately submerged in ice cold water to stop the cooking process.

First the food is sauted or seared, and then simmered in liquid for a long period of time until tender. Pot roasts, stews and casseroles can be cooked in this way if they contain larger food items such as poultry legs.

Again, the food is sauted or seared first, and then cooked in liquid, but normally uses smaller ingredients such as chopped meats or vegetables.

This method of cooking is usually associated with roasting. The juice or liquid that comes out of the meat being cooked is spooned over the roast frequently while it is being roasted. The outer part of the meat is moistened frequently during the cooking process with the juice that is being spooned over. Usually, the extra juice from the cooked meat is added to a mixture to make the meat sauce.